In a normal social interaction, an action usually provokes a single and consistent reaction.

Social behaviors are matters of custom.  In the Real World, into which we awake and generally spend most of our time, social action and reaction are second nature.  Of course there are ambiguous oft difficult social situations, but for the most part, we need not think of such matters.  Most interactions have one logical pathway. 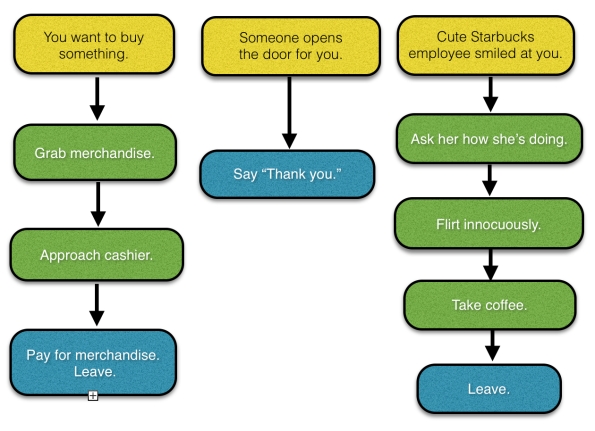 Given pretty much any circumstance, there are only ever one or two appropriate reactions to a social event.  All other possibilities are so absurd as to not be considered. 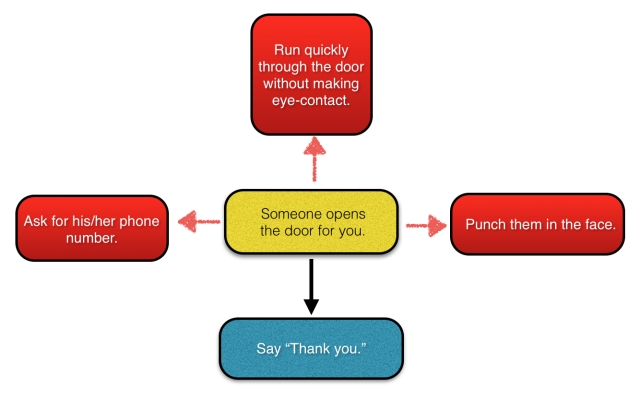 Overwhelming moments of doubt, which may or may not be induced by various illicit substances or extended periods of sleeplessness, can often bring one to question whether or not simple tasks or behaviors are normal or acceptable given a certain set of circumstances.  The appropriate pathways start to break down, and the innate social rules that guide whether or not a pathway is a valid acceptable interaction get cloudy and ambiguous. 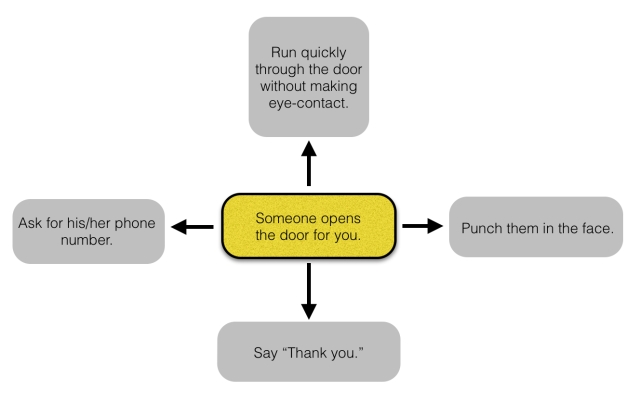 Let us call this doubt the Forbidden Fruit.  It casts its victim out from the Eden of social confidence, resulting in an individual who is deeply confused regarding every aspect of routine human interaction.  When every pathway becomes possible, no pathway seems acceptable.  All sorts of questions arise.

“Is it weird for me to be making eye contact with the crossing guard?”
“Do I shake hands with and introduce myself to the person next to me at a concert?”
“Should I ask the cute girl next to me on the airplane if she’d like to get dinner in Terminal 3 after landing?”
“This first date is going poorly.  Perhaps it would be going better if I were naked?”
“Why are my hands in my pockets?  Perhaps they should be out of my pockets.  But where else, if not my pockets?”

This doubt is terrifying, but it should be unbelievably liberating, because it brings forth an infinite number of possibilities as to how we can react to situations, what we can say to people, and in general how we can identify ourselves.

Except, for the most part, every pathway except for one or two are simply unacceptable.

You cannot punch a street philanthropist in the face.  You cannot strip naked in a coffee shop.  Once these alternate ways of approaching routine social interaction become acceptable you, you become what is known as “crazy” and often times “a felon.”  Our educational, religious, and legal structures are built to eliminate other pathways and reinforce the one established pathway.  The penal system exists for those who refuse to accept the established pathway, and mental institutions exist for those whose pathways are generally dysfunctional.

We are not born into the world as blank slates.  We are born as “Choose Your Own Adventure” books.  Sure, we have some amount of control over our lives, but very limited options that force us to engage in a predetermined script.  From the moment you’re born, you are destined to live out an infinitesimally small percentage of possible lives from the infinite number of lives that are possible to exist. 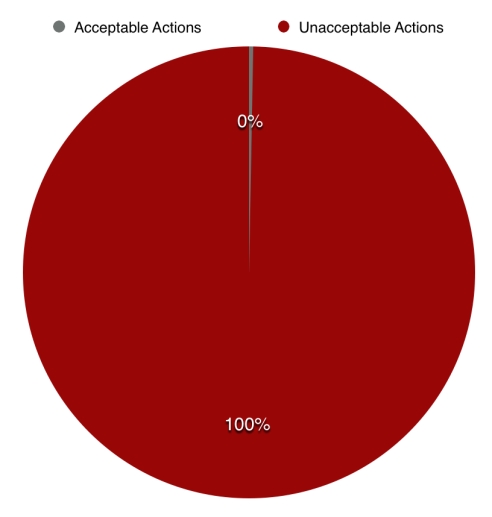 But do not be discouraged.  There are ways you, Reader, can free your identity from the grasps of culture.  They may be small.  They may be inconsequential.  You may not be able to greet a stranger by clucking like a chicken and throwing feces toward the sky, but freedom is close at hand.

For instance, just recently, I went to Lake County, California for no other reason than a desire to see Clear Lake.  At Clear Lake State Park, there exists a cove for swimmers.  Families were picnicking on the beach, and all sorts of people young and old were swimming in the greenish, algae waters.

I pulled up to the parking lot and got out of my car.  I was the only one there by myself.  Why on earth would someone go to a state park swimming cove alone, with no swimsuit and fully clothed no less?  What is my business there?

I walked right up to the water between frolicking families and friends, touched it with one finger, turned around, went back to my car, and drove away.

Just another bonehead with an internet connection.
View all posts by Doctor Quack →
This entry was posted in Editorial, Nonsense and tagged behavior, choices, doubt, freedom, individuality, Language, society. Bookmark the permalink.