Marriage and the Cynic

Marriage: a dusty relic of a bygone era.  A contractual agreement between families for political or material reasons.  An instrument of perpetuating outdated gender roles under the guise of advantageous child-rearing.  A tradition whose commencement is pompous, egocentric, and undeniably banal.  Blah, blah, blah, etc… so on and so forth…

And yet, people continue to get married every day.  Happily.  With tears in their eyes and joy in their quavering voices.

It’s easy to be cynical about marriage.  For centuries, the institution had nothing to do with love, and only recently with the introduction of love into marriage did we somehow develop a staggering 53% divorce rate.  Sometimes it appears as though people get married not because they love their partner, but because they love the idea of getting married.  It’s something we’ve been taught to look forward to since birth – the milestone of milestones without which you might as well be a waste of a son or daughter, and it’s all too easy to scoff at its cultural weight from the outside, as a misanthropic cynic, that is.

But what do I know?  I’m not married.

I was once cynical about marriage.  I still am, to some extent, but my cynicism has been mellowed by the chaos of life.  In the past eight months, I’ve had the good fortune of attending three weddings for six very important people.  Two of those weddings were for close friends of mine, and one was for my brother.  I was privileged to be in the wedding party for all of them.

But alas, like an intolerably arrogant teenager, I thought I knew what life was all about, and with that, I had an awfully presumptuous view of marriage.  Truth be told, I don’t know anything.  Perhaps growing older is less about knowing and more about understanding how little you know.  This year, I know nothing.  Hopefully next year, I’ll know even less.

I speak of chaos.  The first wedding I attended this year was between a college buddy of mine and a high school friend of mine.  Many years ago, when we were in school, he wanted to take me to a midnight showing of Rocky Horror Picture Show because I had never seen it.  My old high school friend lived nearby, and I figured she was also a fan of Rocky Horror, so I called her up, and the first time they met, they were both wearing fishnet stockings and corsets, garish makeup, standing in a dark alleyway outside a movie theater on Santa Monica Boulevard, before going into a theater full of cussing teenagers yelling verbal sex at Tim Curry.

A couple years later, last December, they wed.  What are the odds?  Perhaps if I had already seen Rocky Horror previously in my past, my buddy wouldn’t have felt compelled to take me to see it, I would’ve never called up my old friend, and they would’ve never met.

It’s worth remembering that even the greatest moments of our lives are perhaps results of the most trivial of forgettable instances.  I used to think this relationship made great things trivial.  Perhaps I got that reversed.  Maybe it makes trivial things great.  I’m not sure yet.  I don’t know. 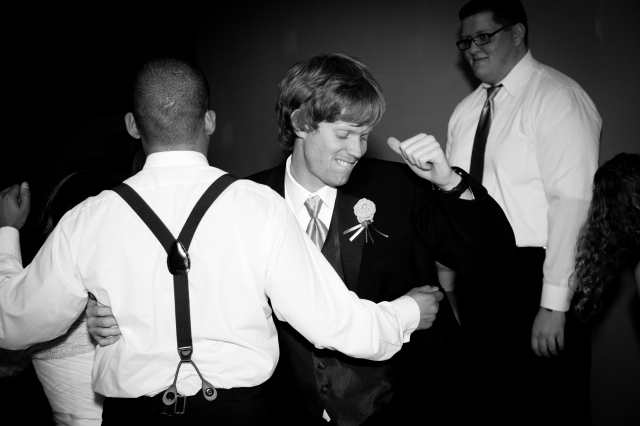 From the banal trivialities of daily existence are born the great milestones of our lives.

At my brother’s wedding reception, they showed a slideshow.  It started with a montage of pictures from my brother’s childhood, starting with his birth and showing him grow up through Boy Scouts, high school marching band, choir, and eventually college at UC Berkeley.  Then it showed a montage of his wife’s childhood, starting with her birth in Laos, her family’s immigration to Modesto, her growing up through school, eventually going to college at UC Berkeley.  Then it showed their lives together – the years of their developing friendship to the present day.

A wedding isn’t only a celebration of marriage between to people.  It’s a celebration of their pasts – the moments that crafted who they are, the chaos of living that shaped two human beings and eventually made them collide.  Everything they had ever done – all the choices they ever made led them to that moment there staring together at a slideshow of their pasts, side by side, surrounded by happy, loving family members.  They had been traveling for a lifetime, unbeknownst to them, just to arrive at that moment about which they once had no idea. 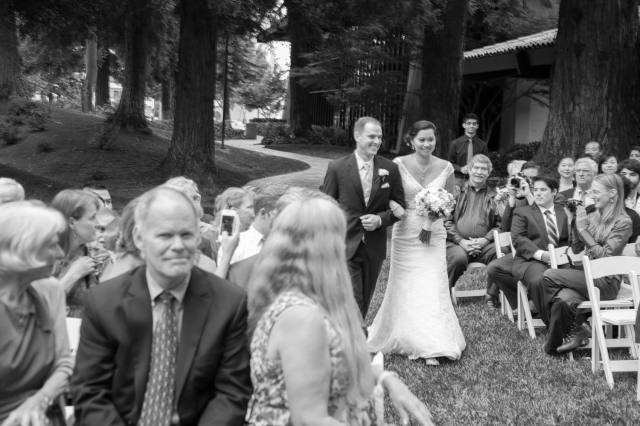 It seems as though every moment we live results from a past of chaos.  I’ve traveled for twenty-six years to be here right now writing this blog entry.  I didn’t know this was where I was headed, but here I am.  Perhaps we should celebrate every moment as if it’s a wedding, because every moment is so utterly unlikely as to be nearly impossible.  But nonetheless, here we are, day in and day out, living as the product of most unusual and unlikely circumstances.  The chaos is astoundingly beautiful.  Weddings symbolize that chaos – the intersection of that chaos to produce a beautiful milestone.

A wedding: a celebration of the past while looking towards the future.  Sometimes it feels as though the past is irretrievably lost in our Yesteryear.  But on the contrary, we continuously live in its consequence, and will continue to do so.

The most recent wedding I attended was for a childhood friend of mine from elementary school.  We didn’t talk much in high school, and had completely lost touch for nearly six years when we both went to college.  One day, I learned that he had moved to Tucson, Arizona, and it just so happened I would be passing through there on my way between Austin and the Bay Area.  After six years, we happily reunited, as different people than before, but both as results of our chaotic and unlikely pasts that would eventually bring us together again as friends.

Had I not made the decision to stop in Tucson, I might not have even been invited to his wedding, forever lost to his past.  But alas, there I was, helping him into his suit jacket moments before he stepped out under an oak tree to receive his wife and read her his vows. 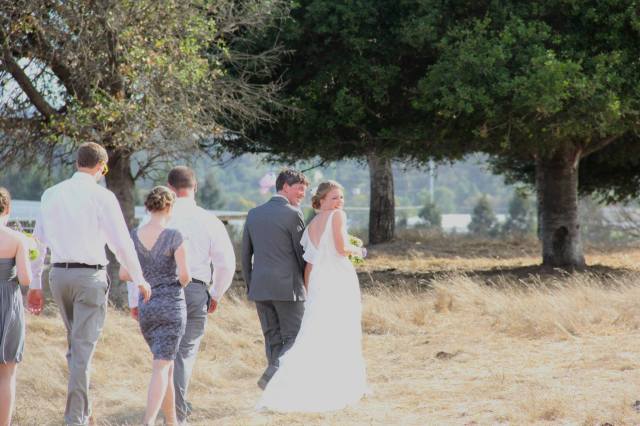 Nothing in the past is irretrievable.  It is completely within our abilities to bring our past out from the cellars, dust it off, and carry it into our future.  It might not look the same as it once did, but what does that matter?  Change is the essence of time.

The past, the future, the chaotic process for an unlikely result, it’s the phenomenally beautiful method for how our world continues to work, and weddings serve that symbolic purpose.  And yet, even then, weddings would only be okay if it weren’t for the sincerity they bring.  Every tear of joy is sincere, the vows are spoken with nervous, breathless voices, the parents cry, the friends cry, and people dance the night away.  Sure, there’s a bouquet toss at every wedding.  Sure, everyone laughs as the newlyweds sloppily feed each other cake.  Things happen every day, and whether those things are remarkable doesn’t matter.  Heartfelt moments that are cliches are still heartfelt moments.  It’s the overwhelming sincerity of the moment that makes a wedding, any wedding, soften even the hardest of cynics.

Sincerity is oft avoided in our daily interactions with others.  That is a tragedy.  Sincerity is phenomenally beautiful.  I forget that sometimes.  Let us help each other look into each other’s eyes, smile, and say, “Thank you for being a part of my chaos.”

I have been humbled by the mutual love and devotion of others.  May they live happily remembering the beauty of sincerity, the unlikeliness of their union, and the grandeur of trivial moments in their pasts and their future. 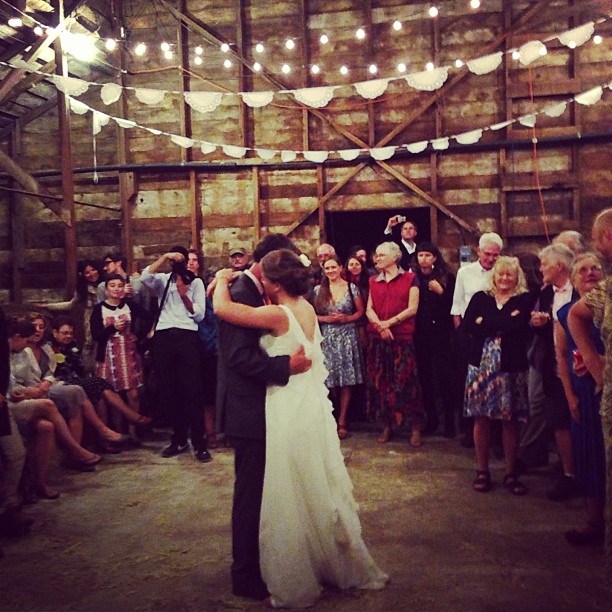 Just another bonehead with an internet connection.
View all posts by Doctor Quack →
This entry was posted in Editorial and tagged chaos, friendship, love, marriage, past, sincerity, weddings. Bookmark the permalink.

4 Responses to Marriage and the Cynic