A Brief Encounter with Nihilism

I think I can pinpoint with half a certainty the happiest period in my life.  It was a four day stretch in August of 2010.

Like countless other memorable tales of shameless self-indulgence, this one recalls  a backpacking trip in Europe (in fulfillment of my Rite of Passage as a privileged American young adult).  After many lonely and aimless days wandering around Poland, I was scheduled to meet two friends of mine in Ukraine.  They were both old coworkers from Los Angeles, but one was at the time serving in the Peace Corps outside L’viv and the other was on his own Rite of Passage elsewhere.

The rest of the story can be briefly summarized: we all miraculously met without difficulty at the L’viv station, spent a night or two at a hostel (true to the Rite), and then traveled to her countryside cottage in a rural village among chickens and gardens to enjoy life in a poorly insulated house without plumbing or running water before parting ways.

What else is there to say?  There was a lake, a sunset, a thunderstorm, cold beet soup, pickles, candlelight, and straight vodka (lukewarm down the hatch).

None of it would’ve been possible without camaraderie.

I’d like to say it was merely an episode in what would be eventful, lifelong friendships, but that would be a lie.  The Peace Corps volunteer now lives in DC.  I’ve barely talked to her since.  The other guy and myself continued traveling together for quite some time, but now I live in Texas and he is still in Los Angeles pursuing various career paths.  We haven’t talked since I left.  We see each other on facebook from time to time, yes, and surely if either of them were to show up on my doorstep, I would happily welcome them in and offer them limitless booze and shelter.  But would our blissful recollections of the Glory Days not be unlike the pathetic reminiscences of dejected middle aged men as they relive the glory days of their high school football stardom?

As of late I’ve been struggling with the bleak consideration that nothing I’ve ever done actually matters.  All of my life experiences are but memories in an irretrievable past, and while many of them have shaped who I am today, some of them appear as novelty photographs in the gallery of inconsequential events.

I remember Ukraine fondly, but if I had never gone there, would I not be living in Texas studying music today?  Would I not be wearing the same pair of pants, reading the same books, frequenting the same cafes?  I can’t say with a certainty what might have altered the  chain of events leading to the modern day had I not bothered with Ukraine, but having analyzed the course of my life, I can assume very little would be different.  For one, I probably wouldn’t be sharing this particular anecdote. Perhaps I’d have another in its place…

Alas, it seems as though most of my memorable experiences have become banal tales I occasionally tell people who pretend to be interested.  I ran a marathon once – I can hardly run a 10k today.  I once took a year of German, of which I remember nothing.  I spent fifteen minutes in Mexicali just to be able to say that I did.  What does it all mean?  How am I any different?  They’re notches in an existential bedpost.

It seems that who I am today has significantly more to do with the forgettable situations of my every day life – the people I pass on the street, the friendships that last for a little while, the minor annoyances that condition my anthology of likes and dislikes – than it does with the grandiose once-in-a-lifetime events that happen and then fade away into the oblivion of memory.  What’s the point of having an interesting present if it falls irretrievably into the past?  Bragging rights?

It’s hard to really understand that my past, present, and future selves are all actually the same person.  I know we are all the same, but I think about them as if they’re different people only loosely related to myself.  I have to remind myself that a past is made up of an infinite number of present moments, and that my future too will become an infinite number of present moments.  But even then it requires psychological acrobatics to get me to actually believe in the certainty of consequence.  Things that happen tomorrow have to go through today to become yesterday, but tomorrow seems so distant and yesterday may very well not have happened at all.

And then, in the midst of giving up hope for the value of life experience, somewhere halfway through the pint of Rocky Road and the fifth of Tanqueray, I accidentally look at the fading memory: three friends doing nothing meaningful or worthwhile in some far off place, and suddenly I perk up.  Irrelevant or not, they were good times, and I can’t help but smile when approached with the memory of a good time.  And then I have to remember: whatever happened in my past was at one point my present, and whatever happens in my present is hiding somewhere in my future.  Perhaps a smile tomorrow really is worth six thousand miles today. 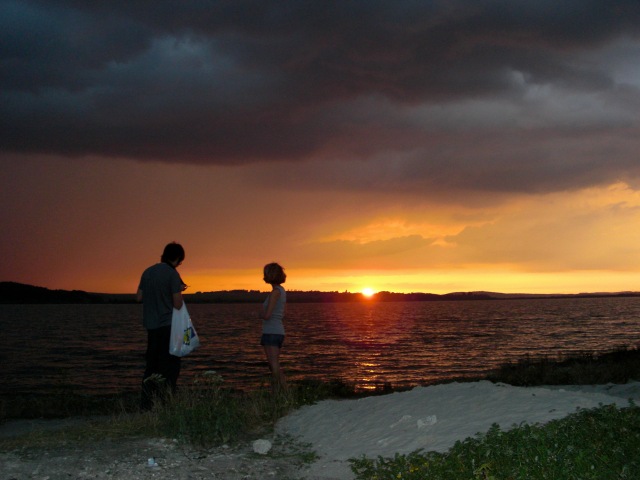 Just another bonehead with an internet connection.
View all posts by Doctor Quack →
This entry was posted in Autobiography, Editorial and tagged friendship, life, travel, Ukraine. Bookmark the permalink.

4 Responses to A Brief Encounter with Nihilism