Perhaps acting in poor judgement can be forgiven.  Seldom exist those who never fail common sense.  Yet, when one is aware of one’s own poor judgement, perhaps the benevolent mercy of excuse is no longer appropriate…

As much as I enjoy hiking and do so quite frequently, I have never actually summited a state high point.  This is a bane for my hiking ego.  I have climbed up the third tallest peaks in two states: Oregon (South Sister) and California (White Mountain Peak), but that’s the limit of my mountaineering credentials.  Thus on my journey across Texas, I set my eyes on the jewel peak of the Chihuahuan Desert: Guadalupe Peak, the tallest point in the Lone Star State.

Due to various circumstances of laziness and tourism however, I didn’t actually reach the park until 1:00pm.  The sun was to set at around 5:00pm.  That gave me four hours of daylight to make it up and down the mountain.  I inconspicuously strolled into the visitor center to get my parking pass and a map.  The ranger, suspicious of my motives, decided to interrogate me:

“So, which trail you lookin’ to do?”
“I… don’t know.”
“Well, it’s too late in the day for Guadalupe Peak.  Need around eight hours for that one.”
“Right.  Of course.”
“There are some shorter ones around that are nice.”
“Well, we’ll see…”

And so I began my cardiovascular workout hiking up the mountain at a swift 3 mph.  I was a man on a mission – a mission that had a time limit.

8 hours my ass.  Look, I’ve been hiking for ten minutes and I’ve already gone at least like three miles.  I’ll be up there and down before that sun even thinks about setting…  8 hours… geez…

And then it began to hail.

This is it, Guadalupe?  This is what you bring to take me down?!  Hail doesn’t even get me wet!  Hail is like bringing styrofoam to a gun fight!  I’m… I’m insulted!  C’mon!  Hail?  Geez…

And then the wind began to howl.

Wind?  That’s it?  I put on my ski mask, jacket, thermal underwear, and gloves.  I was prepared for an expedition into the arctic.  Do your worst, Guadalupe.

Hail can come from the most unsuspecting of skies.

And after two hours of the fastest hiking I’ve ever done, forcing myself against wind, hail, and decreasing daylight, I was there!  Finally: Bush Mountain!

I pulled out my map.  Guadalupe Peak was sitting, smug and self-righteous, across a deep river gorge to my south.  I had gone up the wrong trail.  I was on the wrong mountain.

Words cannot express how frustrated I was in that moment.  Suffice it to say, I might have flipped the bird at that gloating peak so distant yet so close in front of me.  I might have mooned it.  I might have pissed in its direction.  These are all things I might have done.  The whole hike down, Guadalupe Peak lay before me, smirking and teasing relentlessly.  It was a long hike down, the mountain behind me blowing raspberries in the form of icy gale force winds. 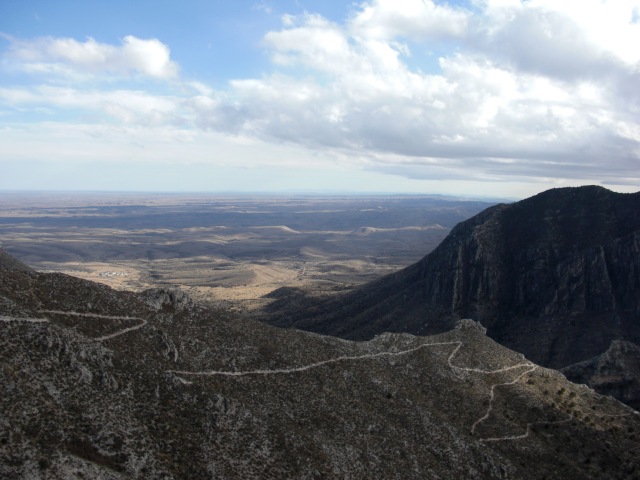 The trail was none too easy either.

I’m not sure there’s a moral to this story, but perhaps in the context of poor judgement, it’s this: even when you do everything wrong – even when you ignore the very gelatin of judgement in which we are suspended – even when you know exactly what common sense is and tell it confidently to bugger off, something altogether different and unexpected can bring you down, and rub your nose in its feces for two hours in the wind and hail.

I suppose what pisses me off the most is: I was right when I did everything wrong.  It took a conscious effort to overcome my poor decisions.  And yet, the easiest decision of them all, written clearly before me on a sign in a parking lot, was the one that did me in.

I mean, god forbid we actually appreciate the natural beauty of it.