In the summer of 2008, I went to Poland for about a month as a rite of passage to explore the ancestral fatherland I always wished I had.  I did this alone, relying on a combination of hostels and CouchSurfing (if you haven’t heard about it, look it up) to put me up at night.  There was nothing unusual about it; most young Americans have an iconic Euro-Tour at least once, albeit usually west of the former Iron Curtain.

I had also studied a year of Polish and thus felt the unfortunate need to attempt communication with everyone I met on a train (unlike Western Europe, people in Poland actually still use trains as a frequent and affordable method of transportation, much to the chagrin of francophile American girls who always hoped to have sexy train rendezvous with some educated, handsome, and romantic man named Jacques.  Don’t worry, ladies, that dream can be a reality if you travel about a thousand miles east, but his name will be Bronisław).  This desperate need for self-validation via native-language communication often surprised my temporary travel mates who aren’t used to hearing Polish being spoken by a non-Pole, and so poorly nonetheless.

The language barrier I was trying to break was none too apparent when I met an old lady on a train from Czestochowa to Krakow.  I immediately tried to break the silence with the standard “Hello.  How are you doing?  I am an American.  I am going by train to Krakow.” (po polsku) which was about the extent of my functional Polish.

The old lady got so excited she spoke nonstop for the next thirty minutes, often asking me questions I didn’t understand and somehow assuming answers I wasn’t giving, because about one minute into the conversation, I was crapping my pants and couldn’t say another word.  When we pulled into the Krakow train station, she thrust her bag into my arms, which I assume meant she wanted me to help her carry it, because I was after all an able-bodied young man.  So, with her luggage as well as my backpack, I followed the old lady out onto the street.  And then she disappeared, and I was still holding her luggage.  Which meant I couldn’t leave.

About ten minutes later, she returned, and before I knew it, I was in the back seat of a taxi cab on my way to who-knows-where.  We arrived on the outskirts of town when she motioned for me to get out of the cab.  While walking up the porch I assumed was hers, a neighbor poked her head out of the window and said hello, to which my captor said something like, “blah blah blah blah young American boy blah blah blah,” which I could only assume meant, “Come over, we’re having young American boy flesh for dinner.”  Unfortunately, social decency prevented me from running.

And before I knew it, I was locked up in some sort of room, completely clueless, and waiting for who knows what to happen.  After about an hour, she beckoned me out of the room, sat me down, and served me a three-course Polish meal.  Which was about when her grandson came home and asked his grandmother who I was.  Then we had a conversation in English:

And so I thanked the Polish grandmother for the wonderful meal and ran away into the warm comfort of Krakow hostel life – that is to say: drunk Irishwomen and belligerent Englishmen vomiting Okocim. 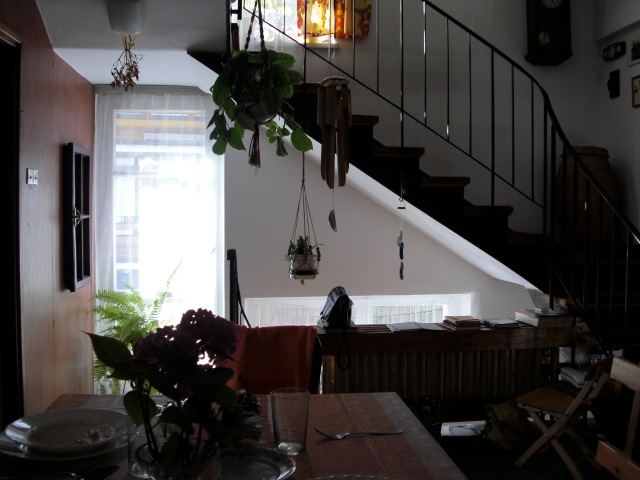 The interior decoration of a crazed serial killer!

Later on during that trip I left Poland and headed for Lithuania, ojczyzno moja.  I was in Suwalki headed for Kaunas, when an old man stopped me in the train station:

I was skeptical.  Kaunas was the interwar capital of Lithuania!  It was the country’s second largest city!  There had to be hotels!  That would be like if Los Angeles didn’t have hotels.

Alas, the old man was right!  I arrived in Kaunas, luggage and all, and stepped out into the baroque and soviet cityscape to find absolutely no accommodation!  I walked for hours around the central town, the old town, and all around like the lost little boy I was.  Eventually, it was about 9:30pm and night was falling.  It was at that moment I became aware that Kaunas wasn’t necessarily the most safe city in the world, and I began to get worried.  I lost my cool.  I started asking people on the streets if they spoke English, which really came across as, “Hey, everybody, look at me!  I’m a rich American!  Rob me!”  Everyone ignored me or gave me a resounding “Ne!” 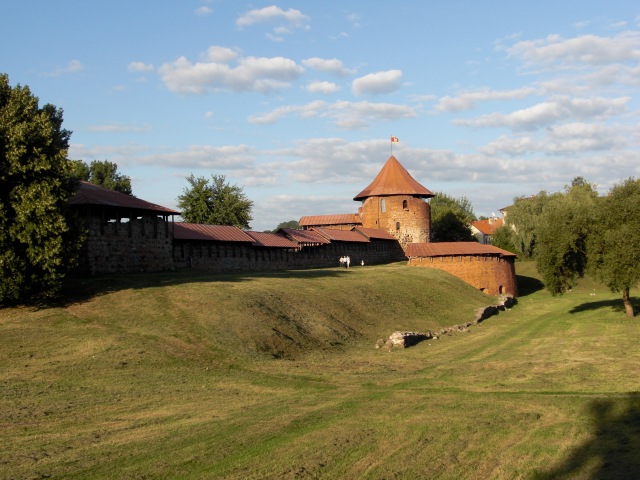 Look at all the gang violence!

Then I saw what looked like a young couple my age.  I immediately saw luck in their eyes.  “Excuse me, sir, ma’am, do you speak English?”
“Why yes, I do,” spoke the man in an accent that rang of eloquence and education.
“Oh thank goodness!  Do you know where I could find a hotel?”
“Yes.  But you can stay at my place.”
“Wait, really?”
“Yes.”

My new friend walked me to his apartment, a renovated 17th or 18th century building, and had me drop my bags in his entryway.  Then he approached me with an idea:

“How about I show you around Kaunas in my car?”

I couldn’t refuse his hospitality, so I accepted graciously and got into his car.  He started driving towards the outside of the city.  “Allow me to show you the Kaunas Forest.”

And then later he said, “You probably wonder why I had you put your belongings in my apartment before leaving.”
“No, I hadn’t wondered that.”
“Good.”

We finally got to the forest outside of town.  “This is the Kaunas forest,” he said.  “No one is here to hear a scream.”
“Heh heh… heh…”

But he didn’t kill me then, so I figured I must’ve been safe.  Which is when we went to the Kaunas Lake.

“This is the Kaunas Lake.  A perfect place to dump the body.”
“Heh.”

Alas, I am still alive!  After he didn’t dump my murdered corpse in the Kaunas Lake, we got a couple beers at a bar and talked about women and history (separately), and then went back to his place and watched Robin Williams standup routines on his computer.  All was well with the world, and to this day, we are facebook friends.

And as you know, you can trust everyone who’s on facebook.

In any case, just remember: when dealing with a stranger, you’re also a stranger.  I have to thank these two not only for their hospitality, but also the blind trust they had in me not to brutally murder them.

Just another bonehead with an internet connection.
View all posts by Doctor Quack →
This entry was posted in Editorial and tagged Kaunas, Krakow, Poland, strangers. Bookmark the permalink.